how to turn on bluetooth selfie stick

Moza Nano SE boasts a selfie stick-type design with a single-axis gimbal motor. It is made out of the plastic yet the body feels sturdy & premium. This gimbal can be extended as a selfie stick too. Also, there is a built-in tripod at the bottom which makes it pretty handy to shoot time-lapse videos. The build quality is no bummer for this affordable gimbal. Also, the Bluetooth remote is a detachable one, thus making it more convenient. The gimbal fits in a pocket easily.

Moza Nano SE is a single-axis gimbal i.e, no pan or tilt axis, unlike a three-axis gimbal. So, stabilization also relies on the EIS & OIS capabilities of smartphones too for panning & tilting axis. Even though being a single axis, the gimbal performs well for day-to-day usage. I used this gimbal with my Redmi K20 Pro, which has EIS up to 30fps for all three cameras. 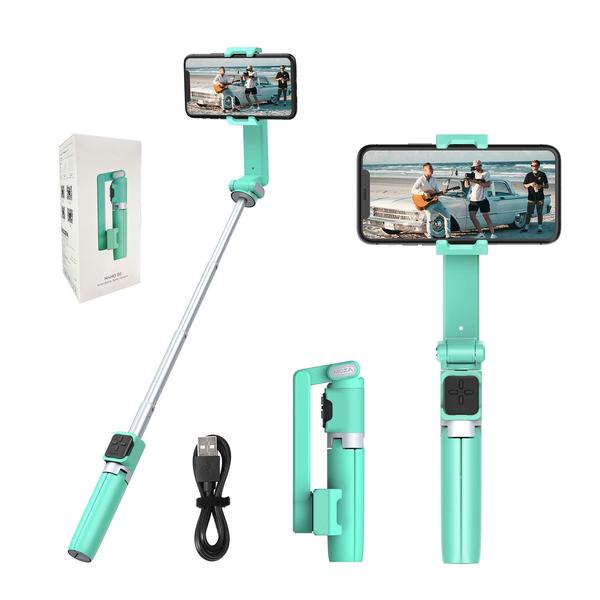 The balancing process on this gimbal is typical. We have to balance the weight of the phone. For connecting, one has to turn on the gimbal & Bluetooth on the smartphone. As the remote is a detachable one, the gimbal & remote are connected via Bluetooth with each other automatically. Then, one can connect the remote’s Bluetooth ID with the smartphone.

Single pressing the up button of the remote changes between portrait & landscape mode. Double pressing the button enables to put the gimbal into two modes; lock axis mode & follow mode. The lock axis locks the smartphone in a single axis ensuring stabilization for footage. The follow mode gives in some flexibility for the smartphone to move alongside the gimbal movements to produce orbital shots.

Even it’s a single-axis gimbal, it performs well in terms of stabilization while walking. The Moza Genie camera app offers a few more features like Palm Gestures control, magic mode, etc. But the videos are capped only up to 30fps. Surprisingly, the remote also works for my native MIUI camera app. I could zoom in & zoom out via the right & left buttons of the remote. Also, the mode changing doesn’t require the gimbal to connect the smartphone. It offers convenience at ease.

The battery life is pretty sound. Upon full charge, it can go along for 7-8 hours approximately. The company however claims it to be 10 hours. The motor is strong enough to handle my Redmi K20 Pro weighing 188 grams. I also tried Realme GT Neo 2 weighing 200 grams & it did well enough in handling. As I have mentioned earlier, the one-axis motor also relies on the EIS or OIS Stabilization of the phones. Stabilization works great while walking and moving normally. Fast-paced movements & running shall impact the stabilization as this is only a single axis gimbal.

In my usage, Moza Nano SE did a commendable job for my day-to-day usage & some cinematic shots. The extendable handle & tripod are some charming add ons for convenience & usability. The Ultrawide sensor of my K20 Pro could see the knob of the motor the entire time but a slight difference in positioning solves the matter. It is also due to the vertical camera arrangement & position of the Ultrawide sensor of my phone. While Realme GT Neo 2 had no problems even with the ultrawide camera. Overall this is a very good quality gimbal according to its price tag of Rs.5850.

So, do you use gimbals for stabilization? Which gimbal are you using right now? Please do let us know in the comment section below.