Movie fans have been wowed by images of the Green Goblin cruising the skies on a drone-esque hoverboard. But engineer, inventor, and fearless flight enthusiast Hunter Kowald has made that Marvel-ous ability a reality with his SkySurfer craft, thanks to a never-say-can’t determination to reach his goal that Insta360 features in a new video.

Kowald first gained serious attention when passerby footage of his early morning aerial shushing above Times Square went viral last June, generating inevitable comparisons to comic book super villains (similar to the one starting this article). The previous month he turned heads around Los Angeles when he swooped onto the roof of a neighborhood McDonalds to make the kind of order delivery usually left to uncrewed drones. Those and other jaw-dropping demonstrations of the self-built SkySurfer led Insta360 to document Kowald’s journey from youthful aerial experimenter to the creator and marketer of what he calls “the world’s most compact, powerful, and efficient ultralight aircraft.” 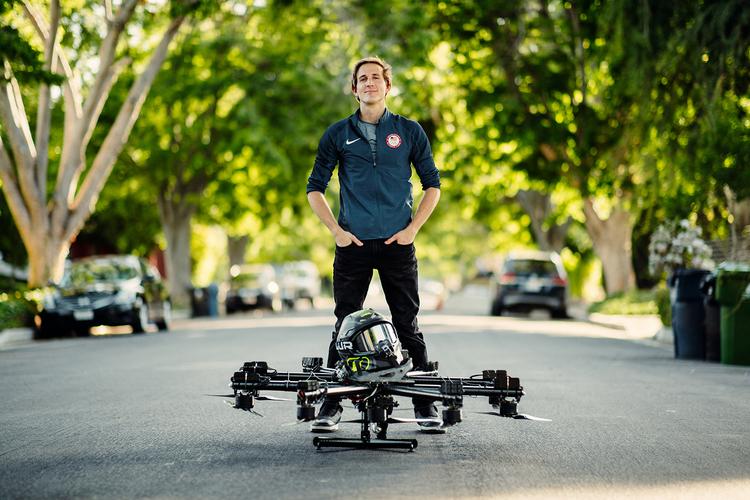 The video recounts Kowald’s trajectory from precocious aerial inventor (starting at age 10 when he repurposed a leaf-blower to enable a craft to hover) up to his recent flight of the SkySurfer above the dunes of a desert, using an Insta360 invisible selfie stick to create third-person perspective shots. The film tells the story of Kowald’s determination to endure endless after-work hours of researching and developing the craft, and his ability to bounce back from what at times had to be crushing test flight failures (some of which produced wipe-out footage included).

“There were times when I was exhausted, tired, and wanted to give up,” Kowald says in the Insta360 video of SkySurfer saga. “But I stuck with it to the end.”

The result of this refusal to quit is a certified single-person hovercraft that can reach top speeds of over 50 mph during battery-powered flights of about 20 minutes. The SkySurfer site adds further details of the “qualified ultra-light aircraft with the following based on a 185 lb. pilot”:

Mindful of the comparisons the Times Square flight drew to their Green Goblin villain, producers of the latest Spiderman movie cast Kowald to fly the SkySurfer down the red carpet in full anti-hero costume during the opening last December. In the end, however, that aerial slalom through cheering crowds never transpired. But now Insta360’s video allows Kowald to rightfully play the starring role in his true story of beating the odds of physics, and making his airborne dreams come true.

Will the Chelsea takeover be a watershed moment for the Premier League? Register for free to continue reading