SAN ANTONIO – I had been waiting for this moment for several weeks -- the moment when the monarch is about to emerge from its chrysalis.

When I knew it was close to happening (you can tell when the monarch becomes completely transparent through its chrysalis, glorious orange wings and all) I spent all day checking my butterfly enclosure. I kept it right next to my front door, and I kept walking out and encircling it every five to 10 minutes.

I found an old selfie stick and rigged it up as a tripod to make sure I didn’t miss it. That National Geographic patience paid off.

I caught the precious moment on camera via time release. The actual process of the monarch breaking its chrysalis and emerging takes maybe a minute or so. You can hear the crack, like scotch tape ripping. The wings of the monarch are wet and tiny when it first emerges. It hangs for a couple of hours to dry out and expand. It’s like watching those tiny sponge capsules you would drop into the bath as a kid and then they balloon into a pink dinosaur or your favorite marine animal.

A couple of hours later, I opened the netted enclosure and let the butterfly hang onto my fingers. I made sure I was under the warm sun (I read butterflies like the warmth and sun), and I watched it flap its wings a couple of times and then make its first flight.

The first time I did this, I teared up a bit. There she went (this one was a female; males have two black spots on their wings, females have more pronounced black veins), as I watched her make her first flight into the world.

It felt like a mission accomplished. I had saved at least one of the many monarch caterpillars turned chrysalis to its final stage. I hope she makes it to Mexico for the winter.

Let me take you to when this organic journey all started, when I was planting milkweed in my garden in September. I wanted to make sure I had enough pollinating flowers in my garden before the monarchs began to stop to fuel up on their journey to Mexico.

Before I could even take the milkweed out of its pot and plant it in my flower bed, a monarch flew inches from my face and began laying her eggs on the milkweed leaves over and over.

I had never seen this in person before and so close. I watched in awe. I let her do her thing. But when she left, I felt a sudden responsibility to see it through that her offspring lived. Monarch butterflies are a backbone pollinator to our ecosystem and food cycle. I felt compelled that these offspring live and make it to Mexico for the winter. 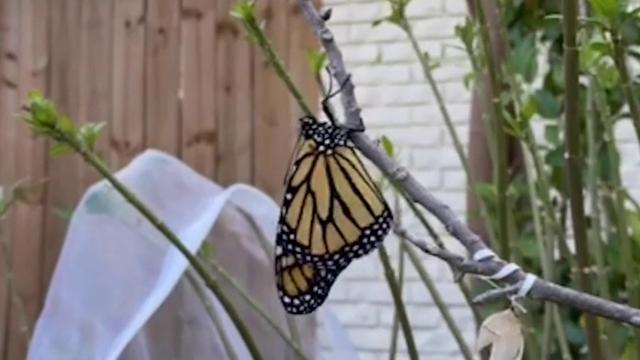 I’m also not the only one who feels the need to protect and raise monarchs. I met several people who have been doing this for years at the Texas Butterfly and Pollinator Festival.

I learned Isabel Anaya, a fifth-grade teacher at NISD Kuentz Elementary has been raising and protecting monarchs with the school’s pollinator garden for 12 years. She started an after-school program where students learn about pollinators and gardening called “Eco Friends.”

“We’re starting to also see a decline in monarchs, and that has to do with the fact that there’s climate change and the fact that humans have a huge impact on that as well,” Anaya said.

It’s for these similar reasons that I have reported on and read about, I kept checking my milkweed. I eventually found those eggs had grown into some very hungry caterpillars. I sought advice from experts at the Texas Butterfly and Pollinator Festival, who told me it would be best to protect the caterpillars from predators with netting if I was going to let them live outside on the milkweed plants.

Within days, the caterpillars ate every leaf of the milkweed. I cut up a giant butternut squash and they gobbled up that as well. Then one by one, about 20 chrysalises formed.

We had a storm one night and I found several of them fell. I read that if they didn’t hang, they were most likely not going to survive or be able to fly. I researched how to hang them back very gently up with dental floss.

I had never seen a chrysalis in person or been able to watch that transformation from Jolly Rancher green with golden lines to transparent. It made me feel like a fifth-grader with innocent excitement, much like Anaya’s students do.

“It’s actually kind of beautiful the way, like when a monarch and its chrysalis, it turns clear,” said Emma Salinas, a 5th grader at Kuentz Elementary. “You could see it’s transparent. You could see the monarch colors, and it’s gorgeous honestly.”

Mia Ortiz, another Kuentz Elementary fifth grader, said she loves being in the Eco Friends club. She said she wants to be able to have a pollinator garden at home one day or in the future.

“When I’m in the garden, it makes me feel so calm and relaxing,” Mia said. “And um, it gives, it gives us a little break, a break from our devices.”

Anaya said it’s not just enjoyable to watch her students’ reactions, but knows they are learning about the importance of our pollinators. She hopes one day they will continue to cultivate pollinator gardens and care for monarchs in the future.