why are selfie sticks banned

Museums from the Metropolitan Museum of Modern Art in New York to the Louvre in Paris and London’s National Gallery have all banned the stick, a widely popular tool to get more folks into smartphone shots.

But at the Los Angeles County Museum of Art,the selfie and stick are not only welcome, they’re encouraged.

LACMA has two outside exhibits of urban art, where “you can use your selfie stick to your heart's content,” says Scott Tennent, who directs the museum’s social media activities. “Inside, it’s more about the safety of the artwork. Take all the pictures you want, but keep the selfie stick in your bag.”

Portnoy says she was “almost beheaded,” the other night in Times Square due to “so many sticks,” in tourist hands. “We’ve opened the floodgates to our narcissism.”

Sree Sreenivasan, the chief digital officer for New York’s Met, says he banned the sticks in April because he found them a “real nuisance. They can hurt the art, they can poke other visitors, and when people are using them, they’re not paying attention to the space around them, and that makes them distracted.”

But like Tennent, he loves that his patrons are turning to the selfie group shot as a way of remembering their time at the museum. In turn, that means many more shots from their day are shared to social media. 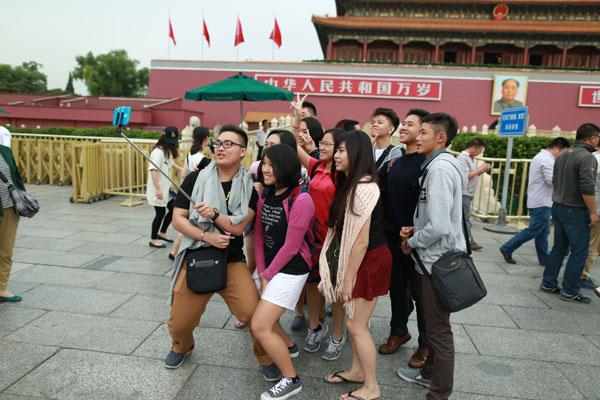 “We had over 6 million visitors last year,” says Sreenivasan. “Thousands and thousands of pictures were taken. We believe selfies are part of the way people are engaging, and the visitor experience.”

Outside, at LACMA’s iconic Urban Light exhibit, patrons pull out their sticks and get group shots by the light poles and maze-like experience of the exhibit.

Selfies on a stick “aren’t posing any harm to the artwork,” says Tennent.

And since the museum encourages folks to post their work to the Instagram social network, using the hashtag #LACMAplusYOU, “we’ve seen the selfie craze really explode here,” he says.

At the Art Institute of Chicago, selfie sticks have been banned inside the museum since the beginning of the year. But selfies are OK.

“We strongly encourage photography throughout the museum, especially selfies that our visitors post on social media,” says the museum’s Amanda Hicks. “Selfie sticks can be used in the exterior spaces and gardens outside of the museum.”

And the selfie craze — the trend of switching a smartphone's camera to face toward the subject, letting him or her take a self-portrait— isn’t going away anytime soon. A new iPhone is expected in September, and analysts predict it will have an improved camera, which will no doubt be used to generate even more selfies.

The cellphone camera “used to be in people’s pockets, now it’s an extension of their arms,” says Tennent.

And the self-portrait has been around since the days of Van Gogh, says Sreenivasan. “The front-facing camera just makes it so much easier.”

Readers: how do you feel about Selfie Sticks?

Let’s discuss on Twitter, where I’m @jeffersongraham. And don’t forget to check out my daily audio Talking Tech reports on Stitcher and TuneIn.