No matter how advanced photography tech may get, there’s something about an actual physical camera and the fact that it always reigns supreme. We’ve reached a point where most of us use our smartphones to click photographs and record videos! I mean, they are extremely accessible and easy to use. But anyone who owns a real deal hardcore camera – knows that the true joy of photography lies in this one gadget. They always take the utmost care of their precious camera, after all, it is their most prized possession! However, cameras these days are going beyond the usual and quintessential DSLRs. They’re getting more innovative, savvy, and futuristic! And, we’ve curated a whole collection of unique camera designs to satisfy all the photography lovers out there. From an Apple iCam Pro action camera that perfectly replaces the GoPro Hero10 to a minimal digital camera for globe trotters – this wide range of camera designs is perfect for all kinds of photographers!

The iCam Pro conceptualized by Diego Valdés (aka. Diego Valoro Design) is a miniaturized version of the iPhone 13 – of course with a slightly different utility of documenting extreme experiences. The triple-camera module setup is a detour from the convention of a single potent camera on such sports cameras. This could be a USP for a brand like Apple who’ll foray into a very competitive space dominated mostly by GoPro. The slimmer, more rectangular shape of the action camera will give prospect users the freedom to carry it in the pocket of their jeans without getting uncomfortable. The choice of colors and materials will also play a part in the success of iCam Pro, if we happen to ever see one in real life.

There’s a mystique to film photography, but for modern purposes, we tend towards digital mediums. Blending the two together, design team Sarwan Bhinder and Vishnu R conceptualized Moir 21, an instant film camera that takes the best of both worlds to meet the beauty of film cameras with the convenience of digital photography. Maintaining the integrity of a film camera and resolving the limitations set by current digital cameras, Moir 21 allows for multiple prints of hand-selected photographs. Many photographers who enjoy takings photos on film appreciate the medium for its single-shot takes.

Designer JK Captain who is already reckoned for his retro-futuristic computer from the Loki series, believes the white plastic-bodied Polaroid Go featuring splashes of color, has some scope for improvement. To present an idea Polaroid would want to look at closely, the designer has added a manual focus lens right below the company’s signature rainbow stipe logo for more precise focusing and better low-light photography. The portable camera is provided with three colorful buttons for Exposure, Timing, and Autofocus, alongside the zoom in, zoom out buttons. The overall design scheme from the Polaroid Go remains the same, however, the ingenious additions will make the Polaroid Go special edition create some ripples in the instant camera industry. 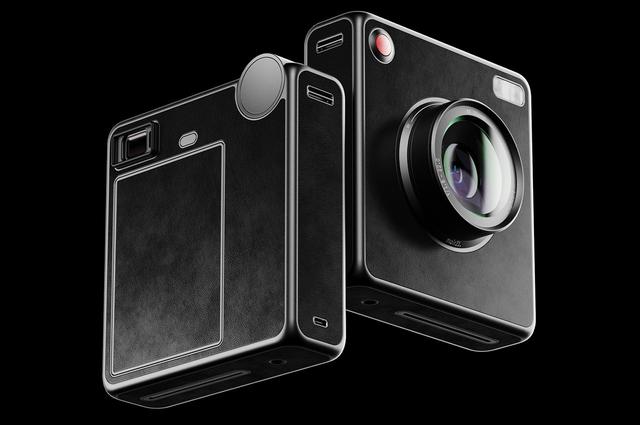 The Insta360 GO 2 miniature action camera provides you with the ultimate hands-free photography experience! You can mount the portable device almost anywhere, and use it alongside the collection of accessories that come with it. It’s tiny enough to comfortably fit into your pocket, and is waterproof up to 13 feet! So you can carry it with you for a photo sesh at the beach. It provides 1440p shots, and FlowState Stabilization to ensure your pictures and videos are steady at all angles. You can connect the gadget to the Insta360 app to preview your content and make any required adjustments.

The Blackmagic Pocket Cinema Camera 6K Pro features built-in two-, four-, and six-stop ND filters, which let you reduce and control the amount of light in your pictures. The camera also features an adjustable tilt HDR LCD with a 1,500 nit brightness. It boasts two mini XLR audio inputs as well. It’s been amped with a 12-bit gamma curve to create brightly colored images by capturing more colors in highlights and shadows! This camera is perfect for shooting in all lighting conditions – whether you’re in direct sunlight or a low-light setting. A large battery also ensures that the camera is always juiced up for long photoshoots!

Meet Woodsum, a camera that champions this very simplicity. Designed to work without batteries, the Woodsum camera captures images on a 35mm reel of film. It uses a pinhole lens instead of those fragile glass lenses… and it’s a device so simple, you could literally build it yourself. In fact, Woodsum comes absolutely unassembled and your first photography project is, in fact, to build the camera! Entirely made from laser-cut pieces of wood that you assemble together, the camera comes complete with a pinhole lens, shutter, viewfinder, film-holder and winder, camera grip, a tripod mount, and even an eyelet to tie your camera-hanging leash around!

What the Action 2 gets right with its design isn’t just the camera (after all, DJI’s cameras are pretty fantastic, to begin with) but rather how the camera is operated. The company designed an exhaustive list of modules, holders, and even accessories to go with their camera, all of which affix themselves to the Action 2 using an incredibly powerful set of magnets (a la MagSafe). The modules simply snap on or snap off, and give you a variety of use-cases, from being able to hold the camera in your hand, fix it to your chest/arm/head, attach it to your helmet, handlebar, or dashboard, place it on a steady surface, or even go underwater with it.

A concept design by Gunwoo Park, this Supreme camera can be the ultimate compact camera for the free-spirited ones who like the outdoors. It’s not really a rugged digital camera but it’s designed for those into subculture activities like hip-hop or skateboarding. This group of people usually prefer capturing moving images as they are more active and creative. The Supreme camera allows you to record a moment while editing images with just one hand. It’s like holding a smartphone in one hand but the camera part is more powerful. The designer was aiming for a very compact gadget that can work as an action camera and an editing machine.

The Mi Action 360 overall champions a rather ‘less is more’ aesthetic. The two-button interface aside from the camera’s body also has a battery level indicator, an in-built microphone, and two tripod mounts that let you hook your action camera onto tripods, selfie sticks, or a host of other mount-compatible accessories. It doesn’t match up to the DJI Action Cam’s magnetic mounting system, which I’ve declared my love for pretty publicly. That being said, the Mi Action 360’s core capabilities are entirely different, and judging by the size of the lens, this little bad boy should quite easily be able to capture 360° HDRI images in 4K, which would make for great immersive VR content.

This smart camera has a powerful performance quotient – courtesy of the crossed section of closed lens that hide from plain sight in a series of plastic casings that move independently. Depending on the shot being taken, the lenses can be swapped with the push of a button. A telephoto for taking a portrait shot or a wide lens for shooting panoramic landscapes on a golden sun bathed evening. The viewfinder can rotate in 180 degrees direction for portrait shots or 90 degrees for a wide shot without moving the camera instead. The functionality is also kept to the bare minimum to let you focus on capturing memories. The flash intensity is controlled via the large wheel, while the positional switches lend the option to toggle between colored or monochrome photos or videos.

Why sustainable building design is crucial for tackling climate change