Thank you for supporting our journalism. This article is available exclusively for our subscribers, who help fund our work at the Orlando Sentinel.

A couple wearing what some consider sexually suggestive T-shirts at Disney got social media fans debating whether or not the shirts should be banned at the theme park.

Sam Carter, a former Disney Creative Entertainment employee at Disneyland, on Twitter as @Cartarsauce, posted an image of a couple wearing white T-shirts, with the female’s shirt reading “I wanted the D” and the male’s reading “I gave her the D” with the iconic calligraphic D that makes the shirts seem like official Disney garb.

Carter’s post reads “D is for Don’t” and people on the social media platform have since commented on the shirts, which are sold on Etsy and Amazon, and have been spotted among the theme parks for some time now.

“If they banned these shirts from ever being allowed in a Disney park again I wouldn’t be mad,” said Twitter user @aleacabri. 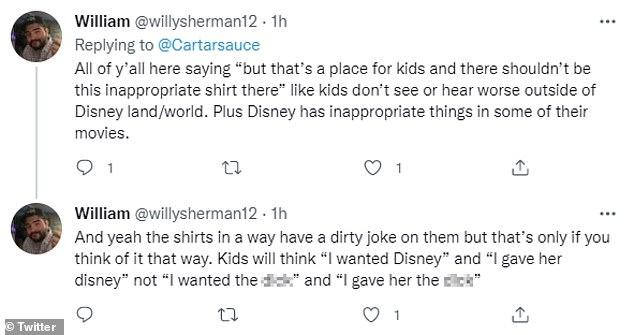 “I saw them in line for Toy Story trams today and I really wish security would be more vigilant about not letting these shirts through,” posted Twitter user @thederpyhipster.

“Dude it’s a place for kids. They knew exactly what the shirt’s mean. Why at freakin Disney? BC obviously we don’t know how to act,” reads a reply from @4tricia.

“It’s only inappropriate if YOU think of it in the inappropriate way. Get your minds out of the gutter… a kid sees the unmistakable Disney D not the D you do. If they are teens and get it, then they are already making everything they see into a sexual joke so no shirt is safe,” reads a reply from @Justindpilot.

“All of y’all here saying “but that’s a place for kids and there shouldn’t be this inappropriate shirt there” like kids don’t see or hear worse outside of Disney land/world. Plus Disney has inappropriate things in some of their movies,” reads a reply from @willysherman12.

Disney parks do have a policy on “inappropriate attire” saying “Disney reserves the right to deny admission to or remove any person wearing attire that is considered inappropriate or attire that could detract from the experience of other Guests.”

That includes “Clothing with objectionable material, including obscene language or graphics.”