A snowboarder was completely unaware of his close shave with a snarling bear until he watched back a video of himself on the slopes.

Brazilian musician DJ Alok had hung up his board after a day on the snow-topped mountains of France when he spotted the beast in a video he'd recorded.

Sharing the clip with his 27million Instagram followers, he wrote: "Watch until the end. I was watching some videos of the trip and this day was crazy!"

In the video DJ Alok can be seen looking into the camera, which is latched to a selfie stick, as he shows off his snowboarding skills.

But as he meanders down the piste, a massive bear emerges from the tree line and starts careening towards him.

Judging by the look on the DJ's face, he's completely unaware the monster is on his tail.

Alok continues filming himself while snowboarding as the bear gives up the chase and apparently stops before disappearing into the tree line.

The footage has left his fans stunned, with one commenting: "There was a bear behind you! You didn't see it at the time, did you? 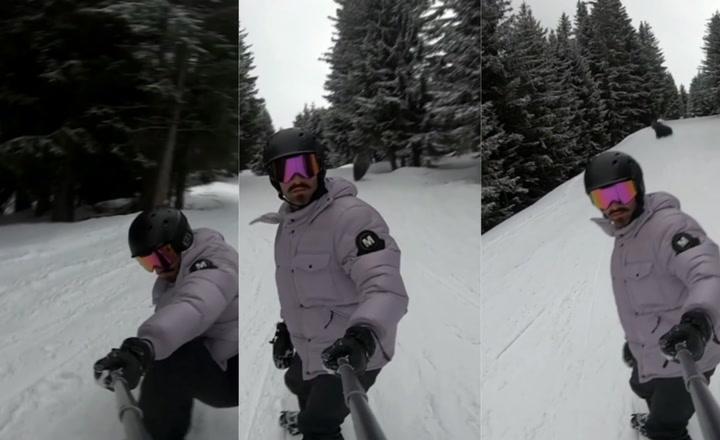 "I've watched this videos 28,363 times because I couldn't believe it!"

A second said: "If that were me, I would have panicked and fallen over 300 times."

Following his lucky escape, the DJ will be performing at London's famed Ministry of Sound club on March 12.

In another recent close shave with the predator, a toddler in Uzbekistan was thrown into a zoo's brown bear enclosure by her own mother.

Thankfully, the three-year-old girl, Zarina, has been discharged from hospital and is now in the care of her grandparents after the horrifying incident - which was caught on camera in a terrifying video.

Visitors looked on in horror as her mother dropped the helpless toddler 16ft into a trench and predator Zuzu ran towards the little girl in the Tashkent Zoo bear’s den.

Meanwhile in California, a 500lb bear known as "Hank the Tank" broke into homes and caused chaos to the residents at the South Lake Tahoe area.