The best iPhone gimbal in 2022

If you’re serious about shooting video on an iPhone, you need one of the best iPhone gimbals. These wondrous devices use a mechanical system to make footage smooth and stable, even while the camera is moving. One of the biggest tells for amateur video shooting is the shake of a handheld camera – an iPhone gimbal will eliminate this, adding production value to your videos, often without costing very much at all.

If you’re on the hunt for a good phone camera for your filmmaking exploits, check out our guide to the best camera phones. And for cheap deals on iPhones including the iPhone 12, don’t miss our continually updated list of the best Apple deals.

The DJI OM5 is a small gimbal with big potential. Versatile and portable, with a built-in extension rod, it uses a 3-axis system to provide the kind of class-leading stabilisation DJI has become known for. Footage shot on phones using this gimbal is super-smooth in a huge variety of situations, and if you’re new to this style of shooting, you can download the DJI Mimo app to make use of the ShotGuides feature, which gives you some handy tutorials.

It’s not a replacement for the OM4 exactly, and some users may prefer this beefier gimbal with its bigger battery and power bank capability – if this sounds like your bag, we’ve included this gimbal further down the list. But we love the OM5 for its sublime marriage of price and performance, and its improvement of DJI headline features like ActiveTrack 4.0, which allows you to command the gimbal to follow moving subjects (again, you’ll need the Mimo app for this, as it works via the phone’s touchscreen).

The magnetic group system is secure and well-designed, and the extendable selfie-stick functionality of the OM5 makes it especially good for vloggers and TikTokers.

The Zhiyun Smooth 4 is a hugely popular gimbal – indeed Zhiyun has a general reputation for making high-quality and affordable iPhone stabilisers. You’ll see a few more from them on this list. It produces super-smooth footage via its 3-axis stabilisation system, and the well laid-out control panel is a winner. We especially like the intuitive focus/zoom ring, which is easy to use and feels just right in practice. 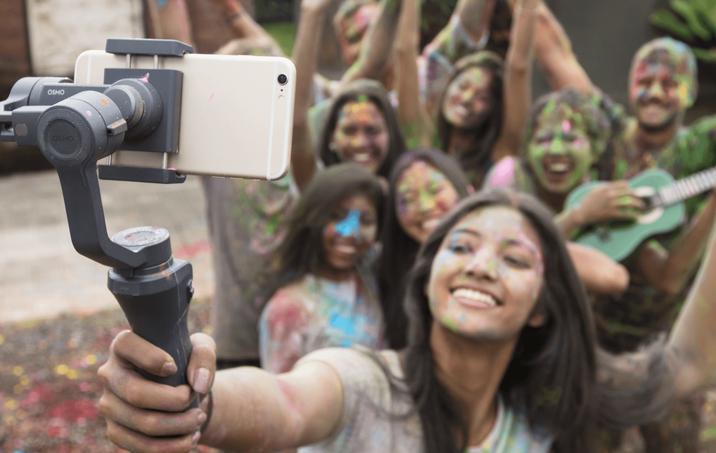 Connect your phone to the ZY Play app and you’ll be able to take advantage of several fun shooting features, including time-lapse, long exposures, panoramas and more. It’s an especially good choice for those who want a gimbal that will open up new options for photography as well as video.

Our only reservation with the Zhiyun Smooth 4 is its somewhat slender payload; it is only rated to take phones weighing up to 210g, which rules out the iPhone 12 Pro Max and may well rule out some future flagship iPhones. Otherwise, this is a great gimbal for a host of uses, available at an impressively competitive price.

The Moza Mini-S is one of the best smartphone gimbals for travel. With a lightweight build, it folds down to 130mm by 195mm, making it easy to slip into a small travel bag. The build of the unit might feel a little plasticky and cheap, but this is what has kept the cost down, and in use the Moza Mini-S acquits itself really well. The 3-axis stabilisation is smooth and stable in a broad range of conditions, and the gimbal provides loads of useful extra modes, including Object Tracking for following moving subjects. The eight hours of battery life is pretty generous too, giving you more than enough ammunition for a day’s shooting – again, marking the Moza Mini-S out as a great option for travel.

Another eminently portable gimbal, the FeiyuTech VLOG Pocket is great for sticking in a bag (or, yes, a pocket, albeit probably quite a baggy one) and taking everywhere you go. It’s capable of holding phones weighing up to 250g, which should cover all but the largest – though the shallow holder means you’ll definitely need to remove a case, if you habitually use one. The 3-axis stabilisation is smooth and reliable, and while it doesn't require use of the FeiyuTech On app in order to work, you’ll find plenty of extra features at your fingertips if you do download the app, including Object Tracking and Gesture Control.

With its built-in 4300K fill light, the Zhiyun Smooth Q3 is an obvious play for the attention of TikTokers and other types of users who are going to be getting a lot of play out of their phone’s selfie camera. If you don’t want to buy a gimbal and a ring light, this is a good way of combining the two by giving your phone some stability and your face a little fill light. And this doesn’t mean it’s a basic gimbal – the Smooth Q3 has a sophisticated 3-axis stabilisation system, with an intuitive control layout that includes a well-designed, easy-to-use joystick.

The DJI OM4 is one of the most well-regarded smartphone gimbals around, even more than a year after its release. So while yes it is expensive compared to the competition, and yes it has some oft-discussed issues like its interference with phone volume rockers or general incompatibility with phone cases, the fact remains that it does what it does extremely well, with some of the best stabilisation you can get for a smartphone. It’s bigger and heavier than many on this list, but there is a purpose to all that weight, housing as it does an extremely sophisticated 3-axis system that puts smooth, cinema-like movement in the palm of your hand. The DJI Mimi app also lets you play with different modes and effects (though some users do report a bit of unreliability and jank, especially on Android).

If you’re not looking to spend too much on a gimbal then definitely take a look at the Zhiyun Smooth X, which is the cheapest on our list and provides pretty amazing value for money. True, you don’t get a stabilisation system as advanced as others – only a 2-axis system rather than 3-axis – but it’ll still do the job, and its telescopic handle means it also works as a selfie stick. You’ll want to watch the compatibility though – it’s only rated to carry phones weighing up to 200g, and many of the more sophisticated iPhones will exceed that.